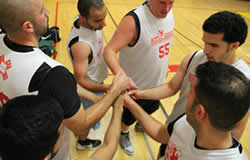 League open to men of all races, ethnicities, religions and denominations

Muslim Basketball (MB) is a 501(c)(3) non-profit men's basketball league conducted several times per year in New Jersey. MB is devoted to giving Muslim brothers and non-Muslim friends a chance to gather in an organized environment, build friendships with one another, pray with each other, and enjoy the game of basketball together. MB offers a high level of segmented competition of multiple divisions while maintaining organized basketball standards such as regulation-sized gyms, referees, and statskeeping. MB's main objective is to satisfy the need for a truly organized men's basketball league.

In the summer of 2005, the organizers took part in bi-weekly pickup games in Flanders, NJ. The gathering between everyone was so strong; those involved knew that they were part of something unique.

The idea for Muslim Basketball came from trying to take these pickup games to another level by organizing them. This would give everyone an opportunity to meet with each other on a consistent basis and strengthen our brotherhood.

We invite you to read about how Muslim Basketball has grown to become a favorite basketball league in the Tri-State area.

The first season was held in the summer of 2006 at Volunteer's Park in Parsippany, NJ. Although the outdoor environment made for a very unique and casual setting, we knew that in order for the league to grow we would have to take the games indoors.

The second season was in the summer of 2007 at the PAL in Parsippany, NJ. With the move indoors came more teams, bigger courts, electronic scoreboards, team statistics, highlight videos and professional referees for the playoffs. The move indoors gave us a real idea for the potential future of the league, and we feel the PAL is a good fit for our vision.

In the fall of 2007, Muslim Basketball was created. We are a 501(c)(3) non-profit organization devoted to giving Muslim brothers and non-Muslim friends a chance to gather in an organized environment, build friendships with one another, pray with each other, and enjoy the game of basketball together.

During the summer of 2008, we continued to play at the PAL in Parsippany, NJ. Additions for the season include: professional referees for the entire regular season and playoffs, a preseason exhibition game, individual and team statistics, full game box scores, and a newly revamped website. The biggest addition to the website are our new forums, allowing all the players to create their own accounts, post messages, take part in polls, view their statistics and so much more. Summerball 2008 had about 100 participants along with about 20 spectators on a weekly basis.

Seven seasons were held between 2009 and 2011 at five gyms throughout the New Jersey area including: Hoop Heaven in Bridgewater, Parsippany PAL in Parsippany, Raritan Bay Area YMCA in Perth Amboy, The Sports Academy in Millburn and Metuchen Sports Plex in Metuchen.

As we move forward to future seasons we continue to strive to make this the best Muslim Basketball league in the Tri-State area and beyond. Our goals for this league transcend simply basketball as we hope it will be a place where people can come together and build brotherhood.

If you have any questions, concerns, or suggestions on how we may best improve this organization, please don't hesitate to contact us.